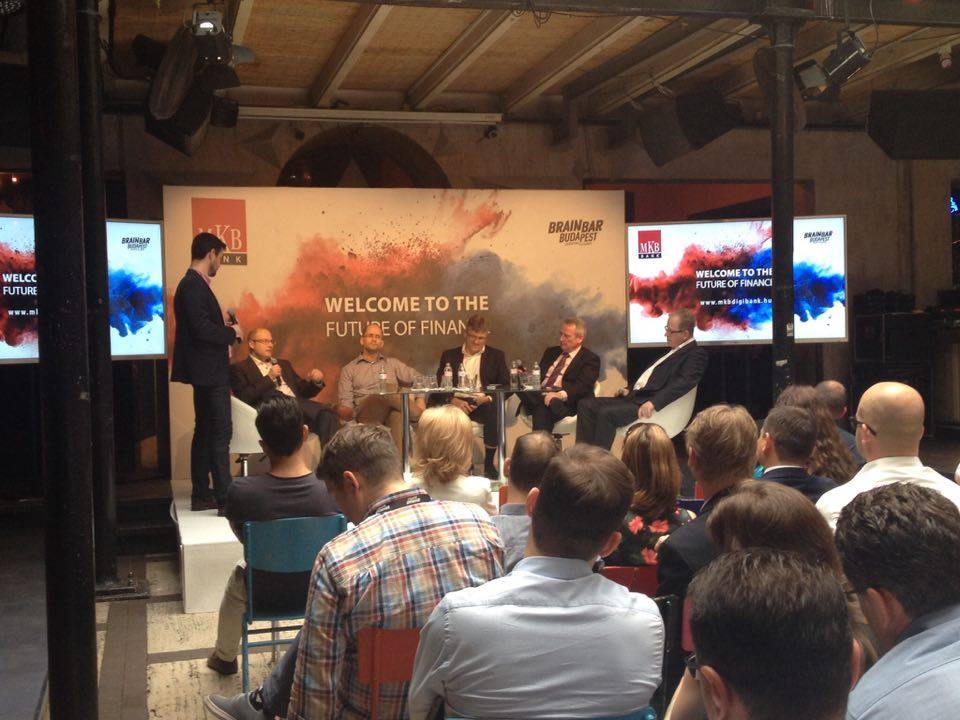 On the 2nd of June we attended the FinTech Lab organized by MKB at Brain Bar Budapest a financial technology related event where all the ecosystem players gathered together to discuss topics related to digital banking and FinTech.

Technology has been making its own way into our finances for years. An ever increasing number of financial institutions develop and apply digital solutions while more and more technology companies enter traditional finance markets with their own solutions. MKB realized that it is time to kick-start a bank led dialogue between the ecosystem players. “Future of Finance in the Festival on Future” the call sounded for the event.

The agenda listed several big names in FinTech including Chris Skinner, one of the most influential people in the sector. Chris Skinner is best known as an independent commentator on the financial markets through his blog, and as author of the bestselling books Digital Bank, ValueWeb and as chair of the European networking forum the Financial Services Club.

Our interview covered several topics in FinTech from the local ecosystem, through the possible relationships of banks and FinTech to the worm or cheese dilemma.

According to Chris Skinner, Central Eastern Europe is a hugely innovative region. „This innovation you do not get in mainstream Europe and mainstream America, because they are dealing with technologies that are implemented before Mark Zuckerberg was born, versus in these countries almost all the technologies are from the 1990s’, many of them from the last decade, therefore they fit for the future fit for the present.”

„The early bird may get the worm but the second mouse gets the cheese.”  As Chris wrote it in his blog, in the Finanser.com, banks prefer to be the second mice. „Banks will always follow, they do not lead. The reason for that is no bank wants to take risks, they do not want to do something first, they want to see it working successfully before they do it. The way banks should be thinking about this when they see something working abroad and it seems to make sense why not do it domestically.” Chris brought the example of robo advisory, the new area in FinTech for managing your wealth and assets using software automation instead of human analysis. This is growing quickly in the US, and now you find companies like BlueOpes launching this capability for Hungary and the CEE region.

For banks, blockchain is an area that is actually really interesting, because they can use it to record any transactions cheaply. „It can potentially revolutionize all of the financial infrastructure globally in a cheaper, real-time and trusted way.”

Another interesting question is how banks should or could embrace innovation. According to Chris, banks should both invest in innovation and look at startups searching for connection points. A good form for this is creating an innovation lab that some banks already have. Although this will not be enough, they also have to reinvent their processes and business models inside the bank.

There are some good examples for banks collaborating with the startup ecosystem. Chris mentioned three of them. „Barclays have been nurturing and accelerating startup companies around blockchain but also around p2p, mobile wallets, other areas. What they offer is a hundred thousand dollars’ worth of free advice from tech mentors to get startups from the idea to the first funding rounds.” BBVA also does a very good program with open hackathon and has a FinTech university investing in several startups. They set a strong innovation model, they are also very innovative internally as well.  Finally there is a bank in Brazil which is not collaborating with startups but is a startup itself. A digital bank that uses social data for getting better deals for its customers. Interesting fact, it was launched by a meat processing company.

Some of our team visited Barclays accelerator in London last week so keep tuned in to learn more about Barclays and their accelerator.

Also, more interviews are coming from the event with MKB, McKinsey and Corvinus University on the blog.

Chris Skinner is best known as an independent commentator on the financial markets through his blog, the Finanser.com, as author of the bestselling books Digital Bank, ValueWeb and Chair of the European networking forum the Financial Services Club. He has been voted one of the most influential people in banking by The Financial Brand (as well as one of the best blogs), a FinTech Titan (Next Bank), one of the Fintech Leaders you need to follow (City AM, Deluxe and Jax Finance), as well as one of the Top 40 most influential people in financial technology by the Wall Street Journal’s Financial News.

Special thanks for the video to Mátyás Karsai