According to Accenture there are signs that fintech is reaching a new level of maturity. Larger deal sizes appeared and some regions are cooling-off. For now we know about more than twenty flourishing fintech unicorns – like TransferWise or SoFi -, although we have already seen some demises – like the story of Powa. Maturity has brought greater diversification to the fintech ecosystem, for example insurance – InsureTech – is a rapidly emerging sector. 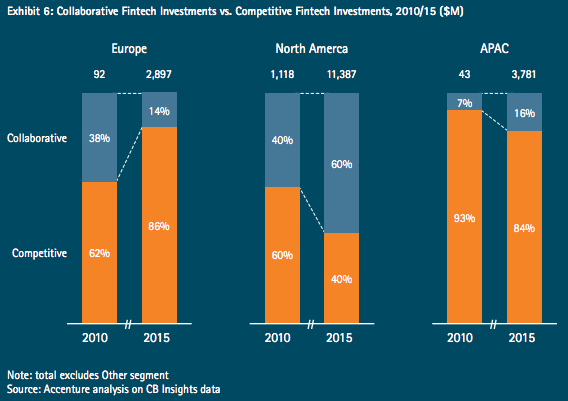 The landscape of financial services is not only disrupted by fintech startups but also tech giants like Google, Apple, Facebook, Amazon and Alibaba appeared finding the sector attractive. These tech giants have a huge advantage in offering high level customer experience over traditional banks.

According to Accenture, banks must develop in reaching, interacting and delighting their customers. The report draws up three different scenarios of the landscape’s future structure. The report suggests that the banks who can collaborate and adapt new technologies are likely to archive the desired position in this changing industry.