Berlin, 13 September 2016 – Coincident with the release of Apple’s iOS10, N26 now offers its users access to the new advantages of Siri and iMessage: Starting today, they can transfer money to friends within seconds. To do so they simply have to talk to Siri. Moreover, they can request money from their N26 contacts using iMessage with only a few taps. Transfers up to 25 EUR per transaction and 100 EUR per day are possible. In order to use these features N26 users need only to download the latest iOS Apple update. N26 is the first bank 1 in Germany to offer payments by voice command. 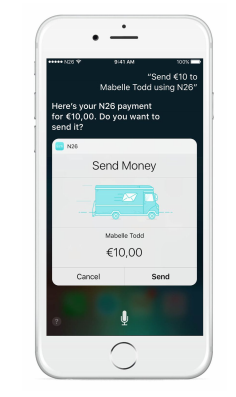 During the Worldwide Developer Conference 2016 Apple featured N26 as an example of how the new Apple Siri can be used for payments. The iOS10 update provides developers with access to Siri and enables them to use the intelligent voice command for their apps. N26 seized this opportunity and made it possible for users to send money with Siri. To do so, they simply have to say the following: “Hey Siri, send 12 Euros to Max with N26”. This makes it even easier to share a bill in a restaurant with friends or to request a monetary payback using iMessage. To “request money” via iMessage users directly choose the desired amount on their N26 keyboard. Users simply have to add the N26 app to iMessage or activate it in Siri’s settings.

The 25 EUR limit of sending money is based on the amounts that can be sent by standard NFC payments.

From its foundation N26 has been working to make banking as simple as possible. Furthermore, users have been able to send money to their contacts using MoneyBeam with only a few taps via SMS or email. Now, N26 makes payments even easier with the new iOS10 operating system: “Our customers can transfer money by simply saying a single sentence. It doesn’t get easier than that!” says Valentin Stalf, Founder and CEO of N26.

N26 is Europe’s most modern bank, geared especially towards the needs of smartphone users. N26 Group is comprised of NUMBER26 GmbH and its fully owned subsidiary N26 Bank GmbH, which has a full German banking license. Opening a new bank account takes only eight minutes and can be done directly from your smartphone. N26 was founded in early 2013 by Valentin Stalf (30) and Maximilian Tayenthal (36), and is led by the founders and Christian Rebernik (39) as CTO as well as Markus Gunter (49) as CEO of N26 Bank and Matthias Oetken (46) as its CFO. In just 18 months N26 has acquired more than 200.000 clients in 8 countries: Austria, France, Germany, Greece, Ireland, Italy, Slovakia and Spain and currently employs 140 people. Since January 2015, N26 has been available for Android, iOS, and desktop. N26 has raised more than $53 million from investors including Li Ka-Shing’s Horizons Ventures, Battery Ventures and Peter Thiel’s Valar Ventures, in addition to members of the Zalando management board, EarlyBird Ventures, Redalpine Ventures, and Axel Springer Plug&Play, amongst others.